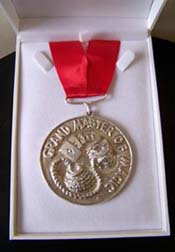 Presentation of the DRAGON Award

Alan and Michele Watson from New Zealand were presented with the 2002 DRAGON Award by The J. Marberger Stuart Foundation, Inc. on stage at the grand ballroom of the New York Hilton Hotel at 8 p.m. on July 4th at the S.A.M. Centennial Convention before an audience of over 1400 registered conventioneers.

The DRAGON Award is presented in recognition of outstanding teamwork in the art of magic. The award consists of four parts: DRAGON Award medals, the Order of the DRAGON pins, a plaque and a thousand dollar cash prize. Jane Stuart, President of The J. Marberger Foundation, Inc. presented the award to the Watsons.

In keeping with the custom of the DRAGON Awards, last year's winners, Paul and Debbie Daniels, welcomed the new winners into the Order of the DRAGON by presenting the medals to Alan and Michele Watson.

Citation for the DRAGON Award

The DRAGON Award name is taken from the criteria for winning. Recipients must demonstrate outstanding talent in the categories of Drama, Romance, Artistry, Glamour, Originality and Necromancy (magic).

Prior to the official award ceremony on July 4th, the 2002 DRAGON Award reception was held in honor of Alan and Michele Watson at the home of Jane Stuart, President of The J. Marberger Stuart Foundation, Inc. The private, black tie event was attended by approximately 50 top magicians from all over the world.

The late J. Marberger Stuart, founder of the DRAGON Awards, considered the Watsons to rank among the top magicians of the World. In praise of one of their performances at the Magic Castle, he wrote:

Congratulations on your marvelous success at the Magic Castle in Hollywood California. My wife Marjorie and I thoroughly enjoyed your show, which we saw many times. We were especially delighted by the style and charm, which shone throughout your entire performance. As a judge of many magic competitions in the United States and Europe, including the most recent FISM, I have been privileged to see many fine magicians. I can honestly say that I consider you to rank among the top magicians in the world.

I envy the people of New Zealand who have an opportunity to see your world class magic on a regular basis. Please come to the United States more often. New Zealand should share its star performer with us all.

Best wishes for your continued success

Alan Watson is the International Deputy to the Society of American Magicians for New Zealand. He is also a member of The Magic Circle London (Member of the Inner Circle) with Gold Star. He is also the New Zealand representative for The Magic Circle. He is a multi recipient of the prestigious Benny Award for top magician and the Scroll of Honor from the New Zealand Variety Artists Club. Michele is a talented performer in her own right and also frequently assists Alan on stage in his performances. The J. Marberger Stuart Foundation, Inc. is honored to include Alan and Michele Watson among their roster of distinguished winners of the DRAGON Award.